About a year ago, a Detroit-area business owner realized she didn’t love part of her hair salon: A massive wall that made up the entire length of the building.

“I used to cringe, looking at the brick wall,” Nikki Maybee said.

She’s had the building for about 12 years, she told us in a recent phone interview. It houses Salon Simply Beautiful, which Maybee owns and manages.

At some point, she said, she knew it was time for a change.

Originally, Maybee hoped it would be a quick-enough process.

“But last year was last year,” Maybee said with a laugh, in reference to the COVID-19 pandemic and everything that stalled or had to be put on hold. Admittedly, the year didn’t go as planned for many people.

So with lots of time on her hands, Maybee did some self-reflection: What did she want for the wall? How would she go about turning her vision into a reality?

She developed a plan to create a mural on that brick wall, to reinvigorate the salon and the area.

Maybee continued to mull it over. At first, she really wasn’t sure what she envisioned artistically.

The city of Berkley, where Salon Simply Beautiful is located, actually has a mural program. But in the end, Maybee decided to commission the artwork on her own.

“I wanted more input on what the mural would portray,” she said.

Maybee landed on this: Imagery involving the Detroit, as an automotive, industrial powerhouse, and the city’s evolution. She also wanted to include a female influence or a portrait of a woman. After all, the salon primarily employs and serves women, and Maybee didn’t want to ignore that.

“And when people looked at (the mural), I didn’t want them to think it was a hair salon — just a beautiful image of something feminine and yet masculine, and paying homage to Michigan and Detroit in an abstract type of way,” Maybee said.

She was starting to form a concrete plan.

Now that her ideas were a bit more firm, Maybee re-started the mural process. In early 2021, she connected with a Pontiac-based artist, 28-year-old Zach Curtis, who has worked in Metro Detroit and the Flint area.

Curtis said he has identified as an artist for just about his entire life, and he’s worked as a muralist for about four to five years.

It was probably late February when he heard from Maybee. Curtis had been working inside all winter. He was more than happy to tackle the empty-wall project.

“It’s always exciting to start something new, especially right at the beginning of the season,” Curtis said.

Once the logistics were squared away, Curtis dived right in, and within about five days, the two had their mural, featuring cherry blossoms, a soaring swallow, contrasting industrial gears and a stunning portrait of a woman.

“It came out perfect,” Maybee said.

This video, below, just might be the proof. She radiates absolute joy.

Maybee said she trusted Curtis with the work, and it was important to her that she didn’t micromanage the project. It’s her wall, but it reflects their shared vision.

“I wanted his artistic input,” Maybee said. “And then to see it on the wall — that was even better than seeing it on the computer.”

The community response has been overwhelming, and all positive. Maybee said she’s gotten phone calls from places like Ontario, and New York, and of course, the local area.

“People have seen the story (on social media) or heard about it or driven by,” Maybee said. “They love it.”

In the end, things worked out exactly the way they were supposed to.

“We had something planned for last year, but for it to be done in the spring when things are blossoming, for a sense of renewal — everyone has had so much to say,” Maybee said. “Even people from neighboring businesses have stopped by. It’s definitely created a buzz.”

She never expected the outpouring of support, and has never experienced anything like it.

“There wasn’t (much) to say about a plain brick wall,” she said with a laugh. “You have this beautiful mural now, and people have stopped to take pictures with it. It’s something to look at and forget for a second what’s going on. You can take a moment to look at this beautiful artistry. It’s all good vibes, positive feelings … no one even remembers what the wall looked like before. It has done its job.”

Curtis even felt the love before his piece was complete. He said passers-by stopped to chat with him, they asked what he was painting, and wanted to learn more as he worked.

“Any time the community likes it — the way they responded (is really rewarding),” he said. “I couldn’t have been more happy.”

Maybee said there were no mistakes in the timing after all.

“We had so much adversity last year,” she said. “And I was so (set) on the timing. But now I kind of pinch myself, like, this was the perfect timing for it.”

And people who haven’t visited the salon in quite some time are now starting to return. In a way, it’s a rebirth for the business.

Maybee said she’s been able to recapture clients, or earn new ones who didn’t know the salon sat there. “It’s like, ‘I go to the hair salon with the mural’ now,” she said.

Curtis said these are the projects he loves.

“We had a really good connection and collaboration.”

For those in Metro Detroit, Salon Simply Beautiful is located on Coolidge, just north of Catalpa.

Sat May 29 , 2021
In order to encourage developers to port their apps to Windows 10 on Arm, Qualcomm and Microsoft have announced the Snapdragon Developer Kit based on a Snapdragon Compute platform and aiming to provide a cost-efficient platform that will be less costly than a laptop. The development kit looks like a […] 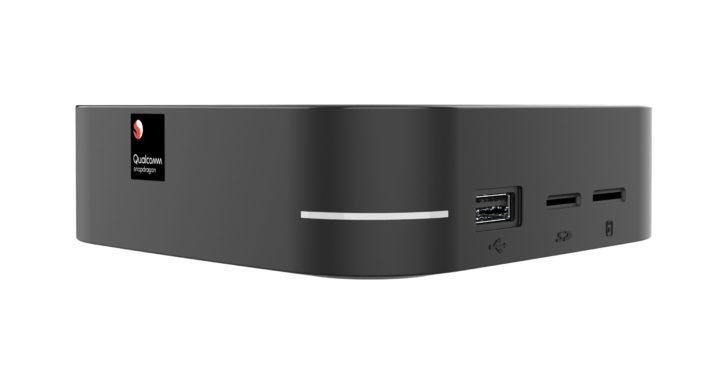