Bill Gates predicted last year that after COVID-19, business travel would permanently drop by more than 50%. But while Gates is otherwise engaged, is business travel, perhaps the hardest-hit segment of the domestic travel industry, coming back?

There is some encouraging news about the return of the road warrior, but how one views it literally depends on whether you see the glass as half-empty or half-full. Hilton CEO Christopher Nassetta, for example, says business travel is at about 50% of pre-pandemic levels. Indeed, I took my first business flight in 15 months last week, to cover the launch of new airline Avelo.

In a recent survey of business travelers commissioned by insurance company Chubb, a similar 54 percent from North America indicated they were OK with domestic flying and 52% of survey respondents were comfortable staying in a hotel. But only 39% were comfortable eating in restaurants and renting cars, while 30% would take a taxi or ride-share vehicle.

Larger meetings and conventions may be slowest of all to return. Just 18% of North American business travelers said they would find it acceptable to attend an event with over 100 people.

Of course, such numbers are moving targets. Confidence in business travel appears to be going up, at least in North America, as vaccination rates go up. Currently 45% of the US population, almost150 million people, have had at least one dose. Meanwhile, COVID positive test rates are trending down. Nationally, positive tests are currently about 5% nationally, down from a January 2021 high of 13.3%.

As Hilton CEO Nassetta told CNBC ,“Business travel, while it’s lagging, it’s coming back. It is probably about half the levels that we saw at the prior peak. Group and events are lagging that, but they’re coming back.” Nassetta added that Hilton is recording stronger corporate bookings in markets where the pandemic has declined. “If you look at markets in the U.S. and certainly China … where they’re further along, we already see business travel back to effectively 75% of levels that we saw” in 2019.

The entire U.S. travel industry ($1.1 trillion in 2019, measured by traveler spending) has been damaged by the COVID-19 pandemic. But no sector has been harder hit than business travel which was a $334.2 billion market in the U.S. in 2019 supporting 2.5 million jobs.

One estimate is that U.S. business travel declined 54% in 2020; other measurements are even higher. In Hawaii, business travel is down 85% from pre-pandemic levels and is not expected to fully recover until 2024, according to the American Hotel and Lodging Association.

Are such steep declines permanent? With the widespread adoption of videoconferencing platforms like Microsoft Teams, Cisco WebEx and the seemingly ubiquitous Zoom, it has been suggested that a large portion of the business travel market may never come back.

Similar comments followed the travel pause after 9/11, almost 20 years ago. Business travel did eventually rebound and grow, but the 2001-2002 ‘pause’ was much shorter than the still-ongoing pandemic disruption. Available bandwidth and videoconferencing technology are vastly improved, making inexpensive and relatively reliable videoconferencing a legitimate alternative.

Business travel does cost both the traveler and her company money and time. There is the expense of booking a flight and hotel, the time spent getting to the airport, getting through security, waiting for a flight, flying, getting out of the airport to a rental car or rideshare, getting to hotel, finding a place to eat and getting from hotel to meeting destination, followed by the whole process in reverse.

Considering such factors, how much business travel is permanently over? Last December, a Wall Street Journal headline suggested “The Covid Pandemic Could Cut Business Travel by 36%—Permanently.” And in November 2020, Bill Gates, a man who used to delight in making a flight with seconds to spare, nonetheless predicted that more than 50% of such business travel will disappear after the coronavirus.

Yet face-to-face meetings have long been considered essential for business. Meanwhile, mass U.S. vaccinations changed perceptions. Six month later after Gates’ gloomy prognostication. Tom Nealon, President of Southwest Airlines, said in an April 29 earning call “Our view is that there could be a 10% to 20% reduction in business travel, either permanently or at least for some extended period of time.”

And for 2021, Nealon saw gradual improvement. He quoted a GBTA Business Travel Survey that suggested “ roughly 60% of respondents expect to resume domestic business travel in the third and fourth quarter of the year.”

Business leaders and ordinary people alike are also expressing frustration with a virtual, Zoomed world. JPMorgan Chase CEO Jamie Dimon is apparently dissatisfied with remote work and videoconferencing, saying he was “about to cancel” all his Zoom meetings. Dimon said that JPMorgan has lost business to competitors during the pandemic when rival bankers traveled to in-person meetings to close a deal.

With such broad hints dropped, it looks like the road warrior is may be returning to the skies ahead of schedule.

These Technologies Could Hold Back Business Travel Indefinitely

Thu May 6 , 2021
It’s a sunny, breezy morning in Eugene, Ore., a place best known for access to the great outdoors, a history of environmental activism and being the birthplace of Nike. I’m standing outside a nondescript, one-story industrial space, speaking with Mark Frohnmayer, chief executive of Arcimoto, maker of a three-wheeled electric […] 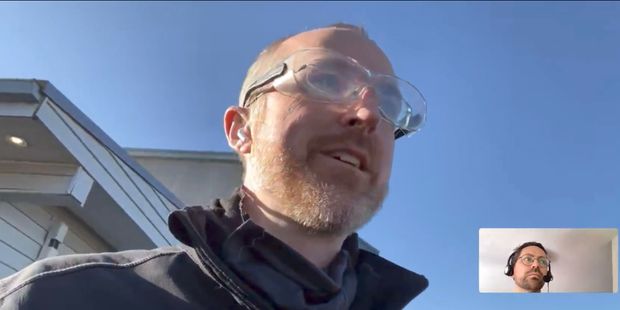