Scottish craft brewer Innis & Gunn has unveiled a swish new design for its ‘Originals’ portfolio, as it looks to brew further success. 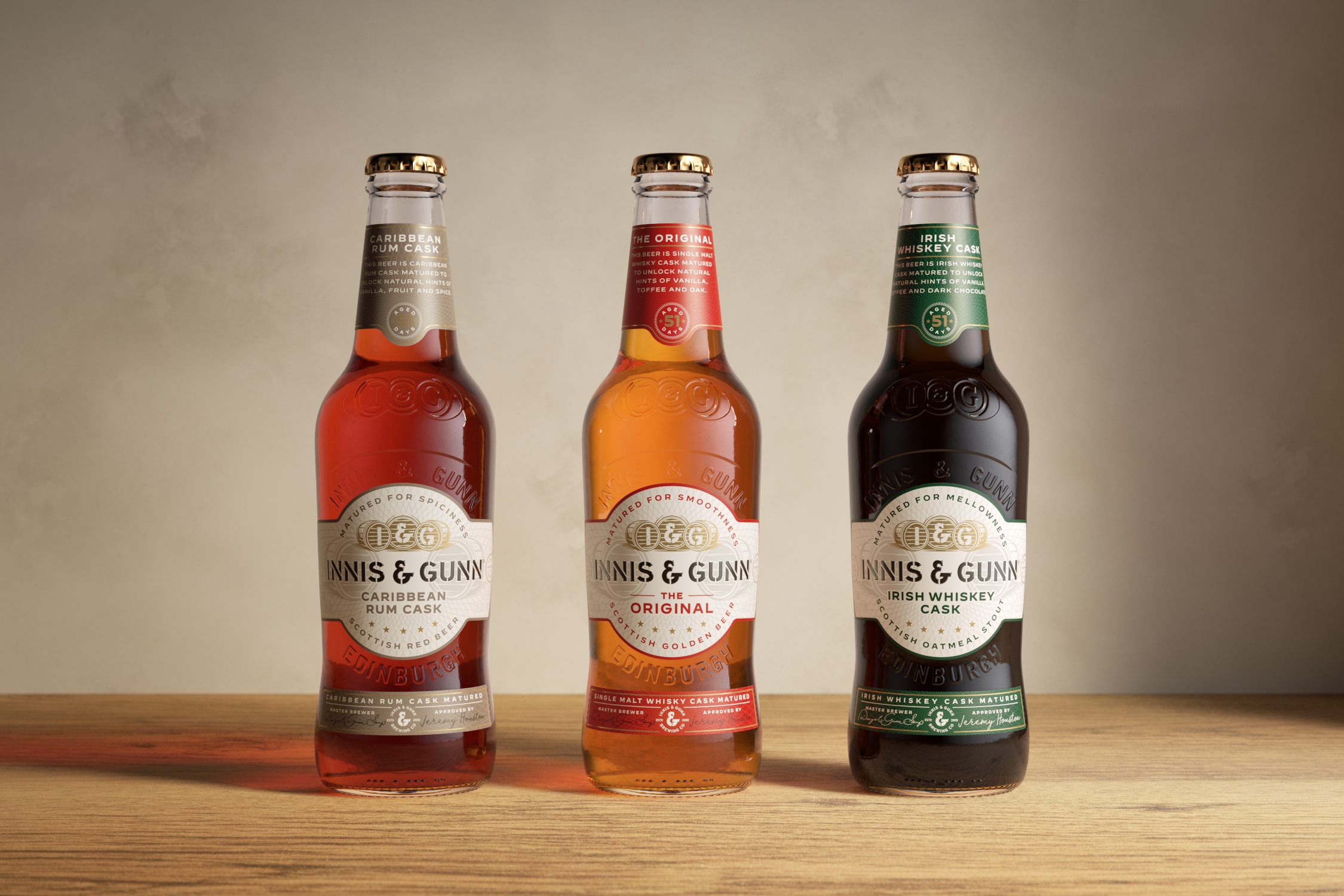 Craft beer brand Innis & Gunn has given its packaging a shake-up to better reflect its premium beer position, innovative brewing style and provenance. The fresh new design, featuring clear glass bottles embossed with striking gold foil, print and watermarks, signals yet another step forward for the brewers who, now in their 18th year, has become one of the UK’s biggest independent, international beer businesses.

Each of the beers in the Originals collection now proudly highlights the brewers home city of Edinburgh, and as a finishing touch, the sleek new labels also feature the signature of Master Brewer, Dougal Gunn Sharp alongside an ‘approved by’ signature, awarded to team member Jeremy Houston to mark his decade with the business. Target drinkers have already responded well to the new look with 74% stating their intent to purchase.

The new designs are at the core of Innis & Gunn’s overall growth strategy and have been implemented as a result of a brand positioning review that has taken place over the last year.

“We have big ambitions and this packaging update supports our strategy, especially as we look to roll-out in England, bringing our premium beers to new drinkers,” said Dougal Gunn Sharp, founder and master brewer.

“There is no change to the beers themselves in terms of taste or the methods we use to brew them. Our drinkers love our beers and Innis & Gunn performs well around the world, so there is absolutely no need to change their recipes.

“We believe this rebrand simply brings our packaging in line with the quality of beer within the bottle.”

Innis & Gunn’s new-look ‘Originals’ range will now feature in the Speciality category, and tweaks have been made to the names and availability of some of the beers. The collection is still lead from the front by consumer favourite ‘The Original’, a single malt whisky cask matured golden beer. Alongside it shines the newly named ‘Caribbean Rum Cask’ (formerly Blood Red Sky), its revised title better illustrating the origins of the casks used to mature the beer. And last but certainly not least is ‘Irish Whiskey Cask’ – formerly a limited-edition annually released Scottish stout, but which will now be available in 330ml clear bottle year-round. All three beers have been awarded Grand Gold at the Monde Selection awards.

The packaging update has been well received by Innis & Gunn’s off-trade customers, with listings increasing to include a newly launched 4x330ml basket pack of ‘The Original’; part of the brewers move out of plastic packaging. The new bottles will start to appear on shelf from June, with Irish Whiskey Cask following from July.

The move follows a strong year for Innis & Gunn, whose sales in the UK off-trade increased almost 30% YOY, while their e-commerce platform grew by an impressive 900% YOY.

Wed May 26 , 2021
Correction: Due to a reporter’s error, this story has been edited to reflect the proper amount of money—$2,500, not $1,000—winners from The Forge receive. When Ohio Secretary of State Frank LaRose made the trip to Marion on Monday morning, he was greeted by local business leaders eager to share their […]