Wedding season has begun, and balloons are the latest trend in wedding arrangements.

That’s where Balloons by Misti, in Columbia Mall in Grand Forks, comes in. Misti Kauffman owns the business, and she predicts balloons will be a staple of weddings for years to come

“Balloons are very trendy right now with weddings,” Kauffman said. “Especially balloon garlands with adding floral pieces into that, whether they be real florals or real flowers and things, or silk flowers going into it. They’re very popular for backdrops (and) for photo areas.”

Kauffman opened Balloons By Misti in late March 2020, just as the COVID-19 pandemic began. Kauffman said the balloon industry was sent into a tailspin due to wedding cancellations.

“A lot of balloon artists rely on those huge events that are happening,” Kauffman said. “A lot of those things (were) canceled, and we had events that canceled as well right when things shut down.”

Kauffman said she believes her customers continued spending money on balloon arrangements because they did not have to pay as much for venues and other expenses during the pandemic. Her business continued to thrive, as outdoor weddings, parties and other celebrations became popular.

“A lot of outdoor décor came about last year as a solution to people who were still wanting to get married during the pandemic, but not being able to do so because their venues were canceled and things like that,” Kauffman said. “They were coming up with things for outdoor decorations for wherever they were getting married at. That’s become a really popular thing.”

Customers continued to buy balloons for pandemic-proof weddings and other celebrations. She said the trend in balloon arrangements for outdoor weddings will continue.

“I think people have realized that they don’t have to have that fancy place,” Kauffman said. “They’re (choosing) smaller and more intimate gatherings, they’re doing it outdoors and in parks and backyards, and the balloons can transform wherever you’re at. It’s a pretty popular trend, actually.”

Garlands have also become very popular for weddings. Garlands between 5 and 9 feet long can usually fit in a car easily, but Balloons by Misti can deliver and set them up at a wedding if they are larger.

“There’s also a big trend with the big light-up alphabet letters or numbers and things like that, and then adding balloons to that to kind of make them pop even more, so those are all very trendy things,” Kauffman said.

Kauffman said balloons are popular with weddings because they are an age-proof way to bring joy and a light-hearted aura to any event.

“When you see a child with a balloon, it’s the same thing with adults and balloons,” Kauffman said. “There’s just something about a balloon that makes people happy. Weddings are very happy occasions, and so it just translates into that happiness and joy that culminates from that wedding.”

Slowly But Not Surely: Airline Leisure Travelers Coming Back, But Not Business Travelers. International Still Crushed

Wed May 19 , 2021
Enormous uncertainty about the structural change in the lucrative business travel segment.   By Wolf Richter for WOLF STREET. In preparation for summer vacation season in the US, United Airlines announced today that in July it would add 400 more flights, compared to its June schedule, which would bring its schedule for domestic […] 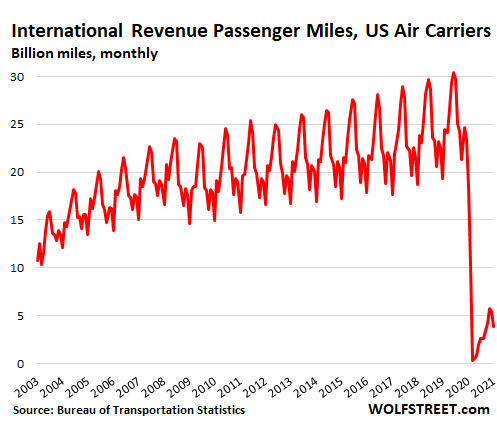